That word can mean many things to different people. For me it's crossing a river from comfortable place to a very strange and unusual land. A nice, creative one with lots of bright colors. I love color. I love all types of art. Getting a little ahead of myself.

I am transitioning from being one type of artist to another. For the past 30 or so years (jeepers, I'm divulging how many trips I've been around the sun) I've been a traditional cloth doll artist. I'd design a doll, make the pattern, find fabric, cut out the doll, sew it, stuff it, paint the face, and then dress it. I've done everything from cottage industry type things, to limited editions, to one-of-a-kinds. I've made play dolls for both boys and girls and dolls you just put on a shelf and look at how pretty and cool they are. That was way back when fabric was good. Now it's hard to find a fabric that will hold up to what I did to it. Fabric that's the right color for brown dolls, fabric that doesn't feel slippery. Because when I found something that worked, they'd go and change it. And the search would be on again. Then the fabric stores started closing or moving further away.

Now don't get me wrong. I love cloth dolls. I've won ribbons, had one woman art shows; been in galleries and cool little shops; taught classes; been in local newspapers; photos of my dolls have shown up in doll magazines; made dolls, that were a huge part of the story in an independent movie (still on the shelf), the main character was a doll maker; had my dolls in an exhibit in a museum (The Delta Fine Arts Museum); and had an interview on the local public radio station because of that exhibit; have a doll on permanent display in a children's museum; and had my dolls decorate the set of a stage production along with making a doll used in the play. I have done a lot with cloth and I am proud of what I have accomplished with them but now I want to move on.

I couldn't understand how I could still design, sew, and stuff the doll but after that, I lost interest. I wouldn't finish the doll. Why? Well, it's the stuffing part. I've stuffed a lot and oh... the right stuffing I like to use is getting more difficult to find. Why do they have to change formulas? Stuffing takes a lot of time. I love painting the faces and dressing the dolls; putting on the final touches of beads, buttons, or feathers. But once I was done with the stuffing, the dolls just sat. And it was a chore getting back to them. Plus my hands are having a hard time doing that part nowadays. I longed to do dolls or figures that I could pose, put on a stand, in a vignette. Tell a story. I tried porcelain (finicky), needle felting (a lot like stuffing), polymer or oven bake clay (no place to do that now), and air dry clay.

For right now, I've settled on the air dry clay. It's not as portable as cloth but easy to clean up. I can sand the dried piece, drill it, paint it, stain it, whatever. And I have started a couple of pieces. I'm terrified that they won't come out. That no one will like them. So I've decided to just make them for me. Just do it. Learn the new medium. There will be a learning curve and it will take a lot longer if I don't open up the bag of clay. I have so many ideas sketched out. On paper, in sketchbooks, on napkins. It's something SOOOOOO totally different.

But I've given myself permission to 'Make It Suck' and then I'll let others decide if they like it or not. That's what a friend of mine told me to do. Make it Suck. I will wrap up the few cloth dolls that I have waiting to be finished. Then step on the next stone leading to the other side of the river. It's scary but I'm getting excited. Until then, here are some bloomers. 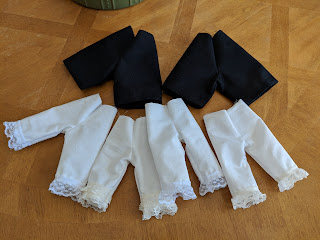 Yes sirree, it's November. Second to the last month of the year. What happened? Don't know but I'm still hanging around. Still w... 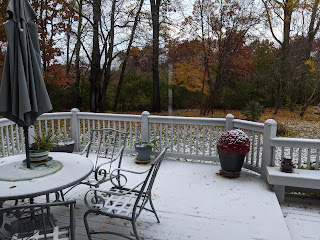